From our humble beginnings in an old barn to our current 165,000 square foot facility, Remlinger Mfg. Co. has been producing farm equipment for over 50 years. Our founder, Wilbur Remlinger had a simple philosophy “produce quality harrow attachments at a fair price to area farmers”. When Wilbur passed away, his son John took over leadership of the company. During John’s 40-year tenure, he successfully expanded the company into non-agriculture industries. The company also expanded its harrow attachments to include almost every style or combination offered, making Remlinger the go to company for harrow attachments.

Remlinger became known as a company where farmers with ideas or concepts for new products could come and get a fair deal. The company is proudly still known for this today. Remlinger has continued to grow and evolve throughout the years. From those simple beginnings in 1964, Remlinger has grown to become a producer of a vast array of farm equipment, serving farmers across the United States and Canada as well as around the globe. 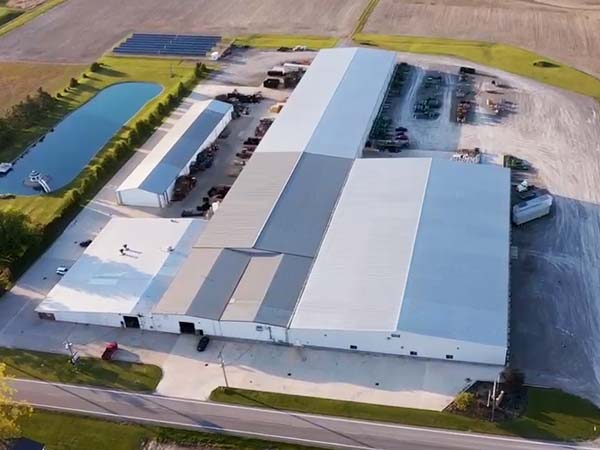 1964: Wilbur Remlinger establishes Remlinger Manufacturing in his barn on the corner of 5th and Water Street in Kalida, Ohio.

1978: Wilbur Remlinger passes, and his son John takes over the company.

1980’s: Diversity became much more of a company focus and several large contracts were secured. One in the guardrail industry which is still held today. Another involved cutting wrist pins for Cummins engines. Approximately 8 semi loads of pins shipped from our facility every month for several years.

1991: The original barn where the company was founded is officially sold and all operations are moved to the main facility located at 16394 US 224.

2000: Our product line is expanded once again with the addition of our Strip Till line. This concept was introduced to us from a local farmer with whom we still work with to this day.

2010: Remlinger partnered with Kelly Engineering from Booleroo Centre, Australia. and started manufacturing the Kelly Diamond Harrow frames for North America. This partnership has grown to include three machine sizes along with packaging & shipping of complete harrows.

2015: Remlinger made its second acquisition when the Sukup implement division was purchased. This consisted mainly of the 9400 High Speed Cultivator and the 2300 No Till Drill.

2018: The end of one chapter and the beginning of another, John Remlinger named Ron Hovest the new President and CEO of Remlinger. The family tradition is still intact as Ron is the oldest grandson of Wilbur Remlinger. Ron had been the head of engineering for many years with over 30 years of service at Remlinger.

Family Owned since 1964 – Remlinger Manufacturing was founded by Wilbur Remlinger in 1964 and the family tradition continues today with Wilbur’s grandson being the current CEO/President. Although the business has expanded and diversified, family remains a core value to the company and is evident in the company culture.

Made in USA – Remlinger Manufacturing is proudly located in Kalida, Ohio. We have dealers located across the US and Canada to conveniently serve our customers.

Quality Driven – With over 50 years of producing farm equipment, we continue our tradition of manufacturing high quality attachments and products to serve farmers around the globe.